On Saturday I decided I wanted to go into the city and join the NYC Urban Sketchers for the day. My friend whose husband usually drives us into the city couldn't go. It was a big decision to go it alone on the Long Island Railroad (LIRR) and subway (the Q train). The train only leaves Ronkonkoma (my station) once an hour on the weekend. That meant I either had to take the 7:31 am train and get there at 9:10 before the location opened, or take the 8:31 am train and be a little late. I opted to be a little late.

When I got on the train there was a family already seated in the middle section where the seats face each other...yay...that is the perfect spot to sketch people if I sit on the opposite side in the next row on the aisle. There weren't too many people on the train and a few of them were masked. The group I was facing included 2 grandparents and 3 kids. They were all busy eating breakfast when I got on so I sat down and had my bagel and coffee as we started to pull out of the station. They rode as far as Jamaica and then got off to switch trains to Brooklyn. It was just enough time (about an hour) to finish my sketch. I didn't sketch grandma because the seat blocked her. 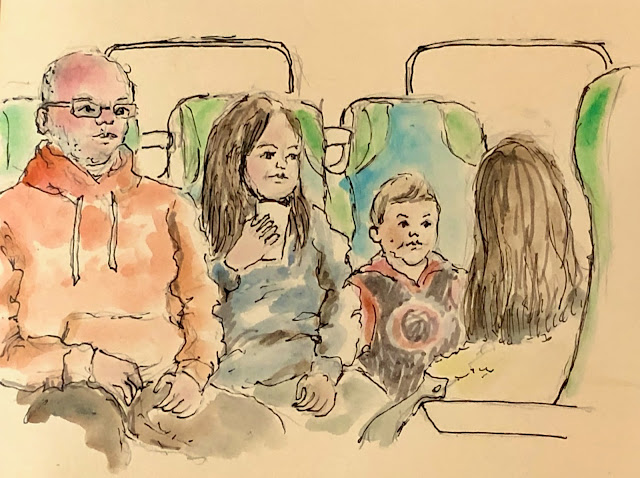 Posted by Joan Tavolott at 2:30 PM