Like I said, my mom's parents came from Goraj, Poland. My sister and a cousin were doing some research about the family history quite a few years back and she said she couldn't even find the town on a map. Well it is now on Google Maps and touring around in the town in today's times doesn't seem like what I envisioned when my grandmother spoke about it. She seemed to indicate that it was mostly farms, but maybe that's just what I though at the time. She's been gone a long time.

Anyway my grandmother's religion was very important to her. Since we were in a Polish neighborhood we attended the Polish church there (St. Joseph's). I used Google Maps to find Saint Bartholomew Church which was the oldest church in the town and dated back to the 18th century. I'm not sure if that was her parish but I'd like to think so. This is the bell tower from the church.

My family is the biggest part of my "roots." This was sketched from a photo that my dad took probably back in 1955 when my sister, Tina was a baby. Dad was the family photographer. I don't remember him taking landscape or flower photos, but after his sister gave him a camera he took all the photos of our extended family. If there was a wedding, a christening, a communion, a graduation, a party, a celebration, a vacation...he was there with his trusty Bolsey camera snapping away. Of course that meant lots of family photos of all of us, especially at holidays, and he would use the timer on the camera. Going left to right are my sister, Michelle (Mickey) who was the oldest. Then Dad holding Tina (aka Chris) who was the baby. Fran (who is no longer with us, was a year older than me. Mom is holding me on her lap and Joe (who we lovingly called "the king" is sitting on the floor. 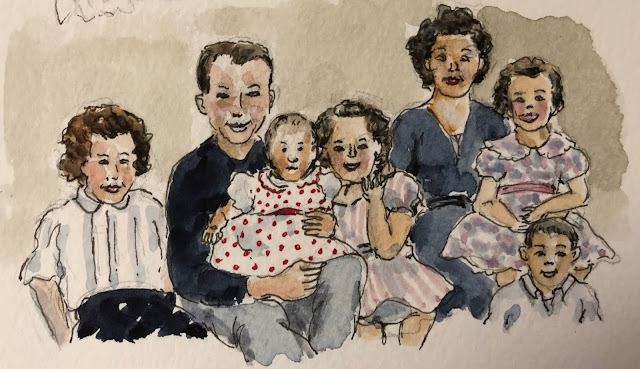 I guess at some point there will have to be a Part 4 to honor the Szalay side of the family, but I know very little about them. My father's parents had both passed before he met my mother. Neither my dad or his two sisters really knew much about the family on that side.

Posted by Joan Tavolott at 4:57 PM