The best part about Nashville is the music and the musicians. We went to the Commodore Lounge which is outside of town a bit. They have a songwriters night every night except Tuesday. Groups of musicians come up on stage and perform their own music. The night started with the more unknown artists and this was a group of 5 some of whom  knew each other already. The two women in the bottom sketch were performing with the two guys on each end of the first sketch. It was impossible to fit all of them on the same page and as you can see I didn't quite have enough time to include as much detail in the second sketch. One musician begins with their own piece, followed by the next person and so on. Each performer gets to do 3 songs and then the next group comes on stage. It is fun to hear the variety of songs and voices. Some of the musicians through the night were good, some so-so and and a few not too good. Some of them even have CDs for sale.

The woman on the left passed by our table after they performed and my husband and I told her how much we enjoyed their music and asked if they had a CD (which they didn't) but she said we could find them on Facebook and youTube. I showed her the sketches and she loved them. She asked if she could take photos of them. Of course I let her. 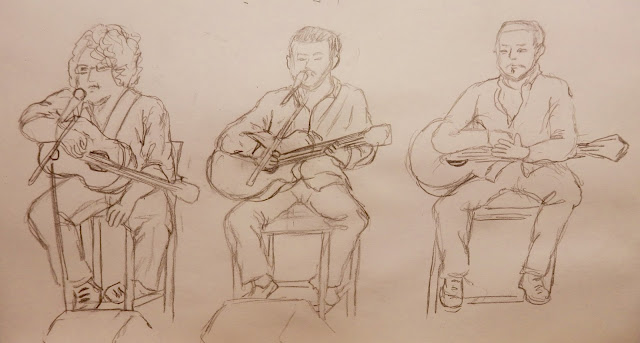 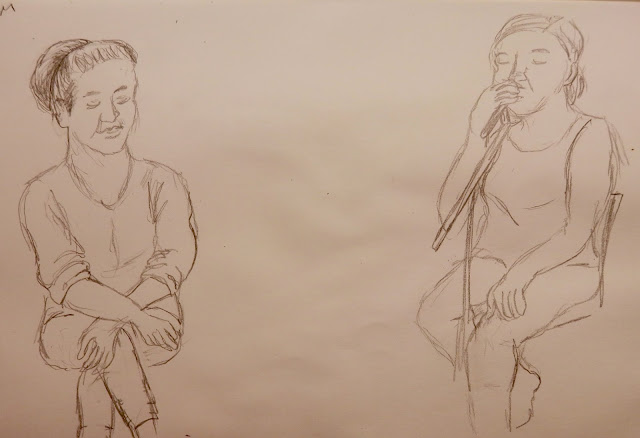 Posted by Joan Tavolott at 6:24 PM