Lunch and the rest room were calling so we left our good spot outside at Rockefeller Center and headed indoors. The NYC Urban Sketchers were meeting for lunch inside 30 Rockefeller Plaza downstairs were there is an area with tables to sit. It did feel good to be inside and warm again.

After a yummy bowl of hot soup I sketched some of the people in the food court area. The baby was being held my her dad, but they got up and moved before I could sketch him. (Some people just don't cooperate. lol) 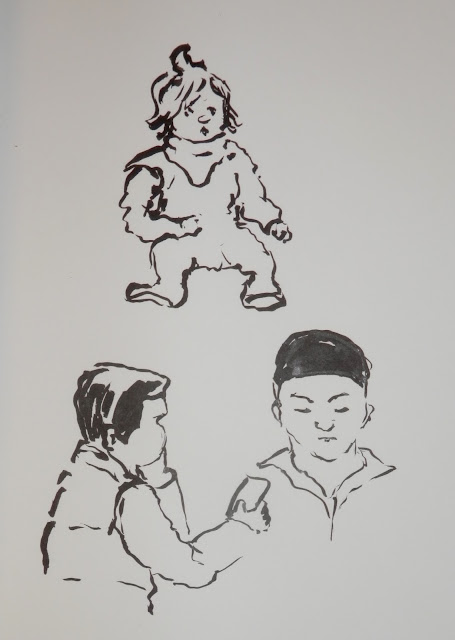 After lunch Suzala and I planned to go back outside to sketch, but we got sidetracked. We passed an area with tables that was up against glass doors overlooking the Rockefeller Center Skating Rink...and someone was just getting up from their table. We started sketching and the table even closer to the glass doors opened up and we were able to move even closer. It was our lucky day! Of course the skaters did not stay still and the seated people kept moving back onto the ice but I was able to sketch some of the poses. (If you look at this sketch and see the area on the right that is so crowded with people...we were sitting right above that in the morning.) At one point the ice was cleared of all the skaters for the Zamboni machine to clean the ice. That gave me time to add the color to the sketch. 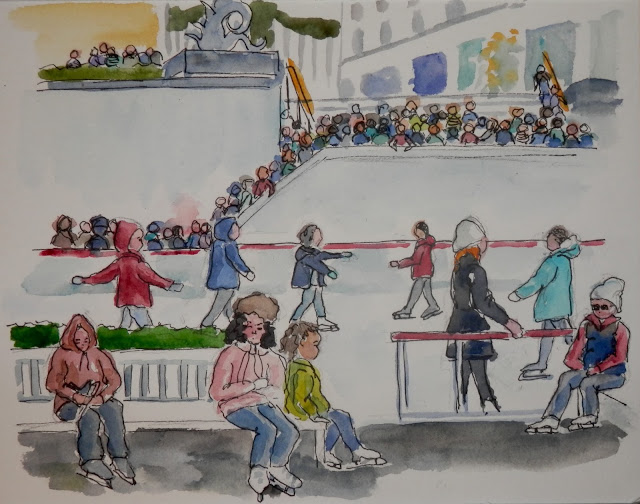 The day ended with a "show and tell" in the same area where we had lunch. There was a couple sitting at a table nearby that enjoyed the show and tell as much as we did. They applauded for all the sketches too.

Of course a trip to the city isn't complete without a sketch of someone on the train. 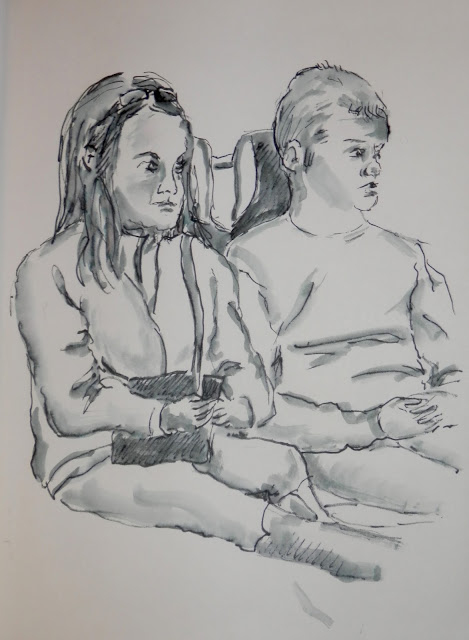 Posted by Joan Tavolott at 2:57 PM

Joan Tavolott
I am a watercolor artist living on Long Island. I try my best to paint or sketch something each day, preferring to do plein air painting. My favorite thing to do is travel and paint in new locations. I am a member of the North East Watercolor Society, the Wet Paints Studio Group, the South Bay Art Association, the PALS Plein Air Society, the Patchogue Sketch Club, the Patchogue Arts Council, and the NYC Urban Sketchers. .